The Swedish Education Experience: Being a Thai Student in Sweden

The Swedish Education Experience: Being a Thai Student in Sweden

Charoenporn ‘Mint’ Kaewmanorom is full of praise for Swedish higher education, as well as for Sweden and its people after the two years she spent at Chalmers University of  Technology in Gothenburg, Sweden.

“The education is so good. And the facilities and infrastructure provided by the university is world class,”

“The first advantage I got from my program is that it is multi-disciplinary. It was a combination between business, law and product development.“

This mix of theory during year one with practical work the second year is what left Mint with a lasting good impression. She describes year two as working in a real company where you get your hands dirty, and apply know-how from the initial year, and let loose creativity in a supporting environment.

“Chalmers has their own incubator and also a lot of students from different programs or backgrounds who come to study together. For example engineers, lawyers, business students and even designers,” says Mint. “We actually get to commercialize the inventions in a real working set-up. They even have a board of directors evaluating your work. And, yes the innovation is real as well.”

The interview takes place at her office with Telenor Group in Bangkok. Mint has been with this Norwegian telco provider since late 2014. Currently she works with digital marketing and applied analytics in three Telenor markets: Myanmar, Pakistan and Norway.

How come you went to Sweden in the first place?

Mint says she already knew several famous Swedish companies are present in Thailand. Ericsson, Saab and Volvo to mention a few. But there were other  Sweden related matters that really caught her attention.

“Whenever I did research while at MUIC, Mahidol University International College, I discovered theses or publications from Chalmers University of Technology because it receives a lot of public prizes. Many of the students behind these papers are engineers and they create a lot of inventions,” explains Mint. “So in a way I got to know the companies first, then the university.”

While Mint studied a three year program in Business Analytics at MUIC she was awarded a full scholarship to Sweden from the Sievert Larsson Foundation. Finally, Mint graduated with top class GPA from MUIC which in turn led her to Chalmers. Mint recalls that at the time she went to Sweden there was an ongoing issue with Thai Jasmine rice which caused a patent dispute with the United States. The argument is still unsolved as far as a patent for jasmine rice is concerned.

“Going to Sweden fascinated me a lot because I saw that several inventions came from the bio-science area, and from the tech side.  At the time my team at Chalmers worked with a water purification device as one of our products. Our task was to decide which part of this technology that could be protected, to identify the intellectual property rights of the product.”

As a second task came commercialization of the product. And then followed more product development. All in order to design a product that met very specific customer requirements as water purification devices are sought for in developing countries that do not have access to clean water.

“This very product was continued by a team in Chalmers and they are now co-founders of the product which is still alive in a startup,” adds Mint.

Another product she brings up in our talk is built on genetics that can be of use to kill cancer. However, says Mint, to identify its unique properties is a particular challenge because usually you can´t protect genetics.

So why should a Thai study in Sweden compared with the big nations such as USA, UK, and Australia?

And then look at the surroundings. The facilities and the infrastructure provided by the university is world class, continues Mint.

“They are not the only destinations,” says Mint regarding the ´big´ education nations. “We know that, at least in Sweden, you actually can expect what you will get in terms of education quality. Unlike UK or USA. There’s a huge difference in terms of quality among different universities there. And when I was in Sweden, I saw how some friends failed classes. But if you fail you just redo the exam. It is not that they let you go easily!”

I think now employers start to be more picky, continues Mint. It’s not only if you graduated abroad,  you can get a job. It’s more what you get out of it.

“I have interviewed some students graduating from different countries, and of course only the degree abroad doesn’t say that they are actually better than others are.”

Another thing is, adds Mint, as Sweden is such a very generous country and the education system is very good, I was allowed to take courses for free outside Chalmers, and inside as well. Courses that were not part of my program. So I got to take statistics classes in the university of Gothenburg.

“Again, as I said to you, in my program, we felt like we were working. We did not feel like we were studying. And when it comes to the entrepreneurial program, the school even gives students some funds to start a business. To commercialize a product, you need some investment, right?  The school even provided that amount of money.  The key is practicality. It wasn’t only theory or studies from a book. And from time to time, there were experienced professionals from different companies who came to share their own experiences with us.”

Another bonus, Mint brings up, is the alumni network at Chalmers. It is very strong.

“So you can actually plan ahead what you want to do after you graduate.”

The studies at Chalmers gave her several years headway compared to the Thai economy and society and the current 4.0 policy.

“Here in Thailand it can sometimes feel like I was attending a lecture in Sweden six years ago, when they mentioned that we are going from an industrial economy to an advanced economy.”

Skype was an example of success in Sweden. They made money from a very small office and a few employees because they had a standardized online platform, which they could scale to fit different countries. They did not need to rely on big manufacturing plants.

But Thailand is changing. Just look at Thailand 4.0 and the EEC-policy which is designed to move the Kingdom forward when it comes to learn, innovate and apply new technologies as well as attract foreign investment and talent in a number of target industries, smart cities and Internet of Things applications to mention a few.

“I found it a bit difficult to imagine, how could I apply this program when I came back home. But whenever I return home today from abroad I feel this is an area people are getting interested in.”

Finally, Mint hails the supporting classmates she had at Chalmers. “I was the only Thai student in the class, but I never felt alone,” Mint says. “Everyone was very professional, and respect each other all the time. And you can expect to get lot of food for discussion inside the classroom.”

“I got to learn Scandinavian culture, as well. And I was really impressed, the way Scandinavian culture works. How professional and efficient people are. People have good values. And, most importantly, I felt very safe studying there. It was very convenient take the tram to school,” says Mint. “I felt like okay, if I need to work for a company, I want to work in a Scandinavian company!”

You can read a presentation of Mint´s program in this link: https://www.chalmers.se/en/departments/tme/school-of-entrepreneurship/entreprenurial-management/Pages/Intellectual-Capital-Management.aspx

Atlas Copco´s decentralised and collaboration-based approach to driving innovation and reaching sustainability goals has been at the heart of last week’s webinar. Over 100 participants participated

On 24 November, the SweCham had the honour of hosting our annual Members Dinner at the Oriental Residence Bangkok. We would like to thank everyone who

We would like to warmly welcome our new intern, Veronika Strupf, to the SweCham Team!

Veronika is a German, third-year student in the International Programme for Politics and Economics from University West in Sweden.   She is greatly interested in 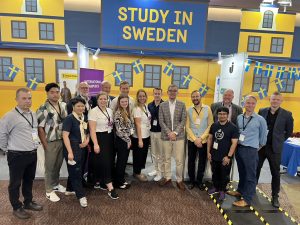 SweCham would like to extend our greatest thanks to everyone who visited the Sweden Pavilion at the OCSC International Education Expo 2022!  We had many